This probably won’t make Jets fans feel much better about the outcome, but a prominent rules analyst says there should have been a penalty on the game-winning punt-return touchdown by Patriots punt returner Marcus Jones.

Dean Blandino, speaking with The 33rd Team, discussed the final play and came to the conclusion that there was a block in the back committed by Mack Wilson of the Patriots on Jets’ special teams captain Justin Hardee.

Blandino says the initial contact came from the side but then you can clearly see contact in the back and there should have been a penalty called there.

How much it would have affected the game will never be known. The Patriots still would have had a chance to win the game with a field goal because, even with the penalty, the ball would have been placed around the 25-yard line. So perhaps, instead of a 10-3 final, it may have ended up 6-3.

Regardless, the ending was a nightmare for the Jets that has now completely changed the trajectory of their season. But at least we have a thought on the punt-return controversy.

Marcus Jones’ punt return TD was electric… but it likely should’ve been negated #NFL rules analyst @DeanBlandino on the block in the back that should have wiped the score off the board pic.twitter.com/Hkyxrdasdz 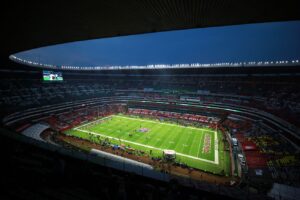