The Jets lost more than a game to the Patriots yesterday. They lost an opportunity to move into first place in the AFC East.

Entering yesterday a half game behind the idle Dolphins, a victory would have moved the Jets into a tie with their rivals from South Florida. The Jets would have taken the division lead based on the head to head tiebreaker they own from an earlier season victory over Miami.

Instead of being at the top of the division, the Jets are now actually in last place. They fell to 6-4, which leaves them tied with the Patriots. New England now obviously has the critical tiebreaker since they have swept the Jets.

The only silver lining in the division race is the Jets find themselves only a game out of first place. They could be out of the cellar quickly if they bounce back quickly from this loss.

Zach Wilson only made things worse after brutal Jets game

Zach Wilson only made things worse after brutal Jets game 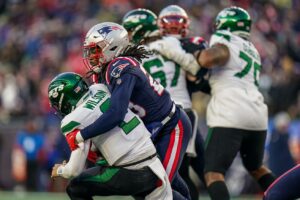