The Los Angeles Chargers cut former first-round pick Jerry Tillery. With the trade deadline having passed, all players are now subject to the waiver system.

With Sheldon Rankins out for a few weeks, the Jets are keeping an eye on the defensive tackle market for any potential short-term help. With Tillery available, the Jets made an effort to bring him in.

However, with the Jets being as good as they are this season, their waiver priority spot is low. The waiver order is basically the current draft order without trades, so the Jets had about two-thirds of the league ahead of them in the waiver order.

Tillery was claimed by the Las Vegas Raiders, who currently sit at No. 2 in the waiver and draft order. The Lions, Panthers, Colts, 49ers, Giants and Chiefs also put in a claim for Tillery.

The Jets didn’t land Tillery, but the claim shows they are always looking to improve their roster and understand a little extra help at defensive tackle wouldn’t hurt.

Sunday against the Patriots will be the Jets’ first game since Rankins went down with his injury. They still have Soloman Thomas and Nathan Shepherd behind Quinnen Williams and could move guys like John Franklin-Myers and Micheal Clemons inside as well if they need to. 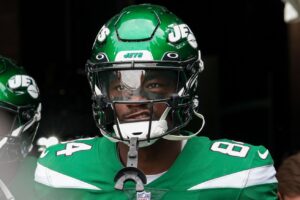 Elijah Moore relishing move to slot: ‘Another way to show my talents’