The New York Jets entered their Week 10 bye week on a high. With an upset win over the Buffalo Bills, they put themselves in a prime position in the playoff push at 6-3.

New York had a chance to rest up, re-evaluate and prepare for the upcoming game against the division rival New England Patriots.

The full, member-only Jets-Patriots film breakdown (1:52:00 in length) can be found at the bottom of this article (must be a Jets X-Factor member and logged into the site).

This is a Patriots team that, just a short few weeks ago, was handed a victory by the Jets. Led by a three-turnover game by quarterback Zach Wilson and costly penalties, the Jets threw away the win in a game where they were the better team.

It was a game that the Jets’ players, coaches and fans knew they should’ve won.

Quotes trickled out post-Bills game and during the bye week about just how excited the New York Jets were to get redemption in Foxborough.

Fans have faith in many of the players who insinuated their excitement: C.J. Mosley, D.J. Reed and Sauce Gardner, just to name a few.

The biggest question mark was Zach Wilson, who not only has struggled mightily against the Patriots in every outing he has faced them, but was also struggling in general to this point in the year.

Regardless of what Wilson’s 5-1 record under center said, when evaluating Wilson on a snap-to-snap basis, the tape showed that he was not progressing.

But hey, let’s have some faith in Wilson and hope he turns his season around in a major way, catapulted by a win against the Buffalo Bills.

Unfortunately, Wilson struggled again. The Jets’ offense had more punts (10) than Wilson had completions (9). The Jets barely had over 100 yards in the entire game and they had two yards in the second half, or less than three inches per play.

The struggles of Wilson and the Jets’ offense canceled out another phenomenal game from the Jets’ defense, which allowed only 3 points to the Patriots’ offense while collecting 6 sacks.

It all led to a very disappointing 10-3 loss, capped off by a last-second game-winning punt return for a touchdown, a twist of the knife.

This and much more is discussed on the latest edition of Blewett’s Blitz!

To view the full-subscriber breakdown, you must be a Jets X-Factor member and logged in.

Get Started with the button below to become a member:

Log In with the button below if you’re already a member:

Next Article: Breaking down Mike White’s Strengths and Weaknesses

FOR MORE AT JETS X-FACTOR, VISIT/SUBSCRIBE AT: How the NY Jets defense dominated the Patriots offense | Film | Jets X-Factor 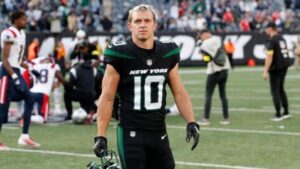 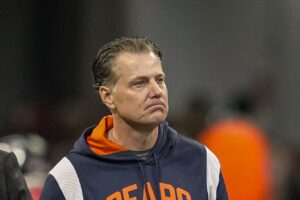