D.J. Reed is a perfect fit for the New York Jets’ defense

As Richard Sherman said, 26-year-old cornerback D.J. Reed is having an elite season for the New York Jets. Reed is allowing the 9th-lowest passer rating out of 89 qualified cornerbacks this season (58.6).

Reed has been particularly elite in one specific area: zone coverage. In fact, he has a case to be the best zone corner in the NFL right now.

No other cornerback ranks top-5 in all five of those categories. So, it’s not hyperbole to say that nobody is playing better in zone coverage than D.J. Reed.

Zone excellence is even more important for cornerbacks who play in this zone-heavy New York Jets defense. The Jets rank eighth in zone-coverage usage with a rate of 75.8%.

As the best zone corner in the NFL so far, Reed is proving to be a perfect fit in the Jets’ defensive scheme.

While Reed is easily New York’s most reliable zone corner at the moment, the Jets’ other two starting cornerbacks are also proving to be great scheme fits thanks to their excellence in zone coverage.

Sauce Gardner is best known for his man coverage (more on that later). But he is still strong in zone. When playing zone, Gardner has allowed 13-of-26 passes to be completed (50.0%) for 163 yards, 1 touchdown, and 0 interceptions. Here are his zone-coverage ranks out of 90 qualified cornerbacks:

For the most part, Gardner’s zone coverage has been strong. There have really only been two big mistakes for him in this area, and both were early in the season. He blew a red-zone assignment in Week 2 to allow a wide-open Amari Cooper touchdown. In Week 3, Tee Higgins worked through his tight coverage to make a contested catch for 45 yards.

Since then, Gardner has tightened up his zone coverage. Here are Gardner’s zone-coverage numbers since Week 4 (out of 91 qualifiers):

Gardner’s solid work in zone coverage serves as a wonderful complement to his nearly unbeatable man coverage. In man, Gardner has allowed 4-of-13 passes to be completed (30.8%) for 7 yards. He leads all qualified NFL cornerbacks in pass breakups (5), pass breakup rate (38.5%), yards per target (0.5), and yards per cover snap (0.09) in man coverage.

Slot cornerback Michael Carter II is also a pest in zone coverage. Here are his zone-coverage rankings on the year, out of 90 qualifiers:

Ignore the completion percentage – that number is mostly irrelevant for slot corners, as they get charged with “allowing” completions on a lot of underneath passes that they have no chance of stopping. The number that matters most for slot corners like Carter II is yards per target. Regardless of whether the pass is completed, how many yards do you allow when challenged? In this area, Carter II has been fantastic in zone coverage, ranking 15th-best as he coughs up just 5.3 yards a pop.

Altogether, the Jets have the best group of zone corners in the NFL. And it’s not particularly close.

New York’s cornerbacks have combined to allow 5.0 yards per target and 0.61 yards per cover snap in zone coverage. Both marks are the best of any cornerback unit by a significant margin.

Here are the NFL’s best cornerback units based on yards per target in zone:

And here are the NFL’s best cornerback units based on yards per cover snap in zone:

Credit is due to Joe Douglas and the Jets’ scouting staff for identifying the perfect trio of cornerbacks to execute Robert Saleh and Jeff Ulbrich‘s defensive scheme.

Next Article: Ranking all 59 NY Jets players to appear through the bye 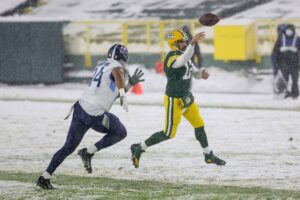