It’s not often that two NFL teams face off twice in a three-game span. The New York Jets and New England Patriots are about to do just that.

Division rivals in the NFL always face each other twice a year, but those games are usually separated by quite a few weeks. Because of the time that typically separates these two matchups, it almost feels as if, when teams meet up the second time, each squad is a completely different version of itself compared to the first time they met. Momentum has changed, philosophies have changed, and many players have both returned and exited due to injuries.

But when teams meet up twice in such a short period of time, it feels like an instant rematch between the exact same iteration of each squad. It becomes all the more important to make adjustments based on what transpired in the previous matchup.

This is what the Jets and Patriots are currently working on. Each team only played one game since the last matchup, as they both had their bye week in Week 10. In Week 9, the Jets defeated the Bills while the Patriots defeated the Colts.

So, not much has changed for the Jets and Pats in the short time since their last matchup. This means preparations for next Sunday’s game will depend largely on what happened in the previous game between these two teams.

Back in Week 8, the Patriots headed into New Jersey and defeated the Jets by a score of 22-17. It felt like the Jets were often the better team, as they outgained the Patriots by 99 yards, but they relinquished control of the game through their self-inflicted wounds: three turnovers and costly mistakes on special teams.

The Jets did a lot of good things in that game. Most of all, the defense was dominant. They sacked Mac Jones six times and allowed only 13 points on drives that did not already begin in field goal range. Overall, the Patriots averaged 3.8 yards per play, which is the lowest mark the Jets have allowed in a game this season.

Offensively, the Jets were doomed by three Zach Wilson interceptions, but the passing attack actually moved the ball efficiently. The Jets collected 336 passing yards. That is a season-high for them and a season-worst for the Patriots’ defense. New York was getting receivers open with ease against New England’s elite secondary.

Outside of Wilson’s turnovers and the woes on special teams, the Jets’ next-biggest issue was their run game. They ran for a season-low 51 yards on 3.4 yards per carry. James Robinson picked up just 17 yards on five carries in his Jets debut while Michael Carter ran for 26 yards on seven carries.

This is where the Jets need to make their biggest adjustment going into Sunday’s rematch.

New York’s run game versus New England’s run defense is supposed to be a big mismatch in the Jets’ favor. That wasn’t the case last time around.

Because the Jets failed to impose their will on the ground, too much pressure was placed on Zach Wilson’s shoulders against an elite, ball-hawking, Bill Belichick-led pass defense. The Jets need to ensure they help Wilson out by maximizing their ground-game advantage in Part II.

Stopping the run is one of New England’s weaknesses. While the Patriots do have a top-notch defense, that unit is built upon a pass defense that is ranked second-best in DVOA. Their run defense is only ranked 19th. New England is also placed 22nd in yards allowed per rush (4.7).

Meanwhile, when the Jets win, they usually do it on the strength of their run game. Over their last four wins, the Jets averaged 160.8 rushing yards per game while surpassing 130 yards in each game. This was on full display against the Bills last week. The Jets racked up 174 rushing yards against Buffalo’s tremendous defense.

If the Jets can go for 174 on the ground against Buffalo, they should be able to match or beat that against a Patriots team that has allowed at least 180 rushing yards in three games this season (tied for the most in the NFL).

So how can Mike LaFleur and the Jets position themselves to run the ball more successfully against New England?

That brings me to the one key change I hinted at in the title of this article: Run the ball out of 11 personnel more often.

The Jets didn’t exploit these tendencies in Week 8. They need to change that.

New York wasn’t uber-successful on those seven carries, but the results were better than the alternatives. The Jets gained 28 yards on 7 carries with 11 personnel (4.0 YPC) compared to 23 yards on 8 carries with any other package (2.9 YPC).

Interestingly enough, in the following game against Buffalo, the Jets altered their approach and relied on 11 personnel as their primary package for run plays. It led to fantastic results.

This highlights a season-long trend for the Jets. New York is actually far better at running out of 11 personnel than 12 personnel. This is surprising considering they signed two good blocking tight ends in C.J. Uzomah and Tyler Conklin, and they have accordingly used a lot of two-tight end packages to get those guys on the field together, but the numbers are staggering.

LaFleur needs to mirror his approach against Buffalo when the Jets head up to Massachusetts on Sunday. Make 11 personnel the basis of your run game. Use it on somewhere from 60 to 70 percent of your rush attempts. If it worked against the mighty Bills (who are currently 3rd-best in fewest EPA/carry allowed against 11 personnel), there is a strong chance it will work against the Patriots.

As for whether the Jets should switch to being an 11-heavy offense for the rest of the season (at least in the run game), that’s a conversation to be had on another day. But in this particular game against a Patriots team that can’t stop the run against 11 personnel, the path to success is clear.

Adding to the appeal of this plan is the likely return of wide receiver Corey Davis, who did not play in the Jets’ previous game against the Patriots.

Davis’s stellar run-blocking ability is one of the biggest reasons New York has been so successful when rushing out of 11 personnel. Using 11 personnel forces the defense into its nickel package (subbing a LB for a DB), but since Davis is such a good blocker, the Jets hardly lose any tenacity or blocking ability versus if they subbed out a wide receiver for a tight end – creating an advantage on the outside.

Get the wide receivers involved, too

Finally, here is yet another reason this plan is enticing: the threat of wide receiver runs.

The Patriots have been susceptible to getting gashed by wide receivers on the ground, and 11 personnel is the perfect package to exploit that problem.

New England has allowed the sixth-most rushing yards to wide receivers this season (85). Lo and behold, guess what personnel package was used for 79 of those yards?

It’s not as if all of those yards were gained on one play. Teams were successful nearly every time they tried this against New England, earning a positive EPA on five of the six plays. Those carries resulted in gains of 1, 8, 8, 15, 18, and 29 yards.

New York is ready to take advantage. The Jets have one of the NFL’s best rushers at the wide receiver position in Braxton Berrios, who has rushed for 82 yards and 2 touchdowns on 7 carries this season.

Berrios did not register a rush attempt in either of the past two games. It’s time to get him back involved in the run game, especially since the long period of time since his last carry could make the defense less likely to react strongly to him as a rush threat due to what they’ve seen on film recently.

Plus, the Jets have another speedy wideout who can do damage on the ground in Elijah Moore, who has rushed for 50 yards and a touchdown on 7 carries in his career.

The Jets have been slowly transitioning Moore into the slot over the last few weeks – seemingly establishing him as a gadget threat by sending him on a bunch of pre-snap motions – but they have yet to give him the ball since he changed positions. This week is the perfect opportunity to change that.

Perhaps the Jets start to actually feed Moore on some of those motions. They can take advantage of the fact that Moore is not a respected threat right now. Watching Moore’s film from the past few games, the Patriots will see that Moore has never gotten the ball when motioning, so they might be a step slow to react when they see that from him on Sunday. Why overreact to Moore before the Jets prove they’ll give him the ball? LaFleur can do a lot of damage by exploiting this.

The Jets did not give a single rush attempt to any of their wide receivers in the previous New England game. While that was puzzling considering the Patriots’ issues in this area, perhaps it will help them going into game two. The bag of tricks is still full. Since the Jets didn’t put any gadget plays on tape in Week 8, New England’s defenders will be less likely to get tipped off when the Jets pull them out this week.

I would pull out my first WR run early in the game if I were LaFleur. Catch the Patriots by surprise during the scripted portion of the gameplan. If you wait too long, you might let them catch on to what you might be setting up for later in the game.

More so than the surprise element, I think an even greater reason to hand the ball to a WR early on is the lasting effect it can have on the rest of the game.

If that first play is successful, it will help open up the run game for the rest of the afternoon due to the threat it established. Pre-snap motion will demand immense respect from the defense, opening up lanes elsewhere.

Then, the Jets can ground-and-pound up the middle out of 11 personnel throughout the middle portion of the game. Once the Patriots start adjusting to stop that, the Jets can call another WR run and go back outside.

The overall plan is simple: Build the run game around 11 personnel while sprinkling in a couple of WR runs out of that package. If the Jets do this on Sunday, they should have a lot more success on the ground than they did in Week 8.

FOR MORE AT JETS X-FACTOR, VISIT/SUBSCRIBE AT: NY Jets can beat Patriots with one key change from Week 8 loss | Jets X-Factor 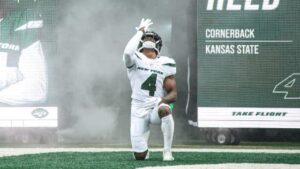 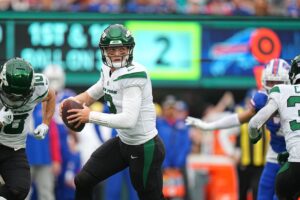