For the first time in seven years, we can say it: The New York Jets are gearing up for a playoff push.

After pulling off an upset victory over the Buffalo Billls, the Jets entered the bye week with an impressive record of 6-3, tying them for third-best in the conference while placing them in the AFC’s fifth seed. It officially puts New York squarely in the AFC playoff race for the second half of the season.

Not only did the win help New York in the standings, but it also provided a massive improvement to their stock as a true playoff contender. Defeating an elite Buffalo team is a tremendous booster to the Jets’ resume. It proves they are a team that should be taken seriously.

If the Jets want to continue raising their stock as they enter the playoffs, they will have to improve on the offensive side of the ball.

New York’s defense is thriving. It ranks sixth-best in DVOA. That group is more than ready to lead a deep playoff run. But the offense needs to catch up, as it ranks only 19th in DVOA.

One of the best ways for the Jets to improve offensively would be to start maximizing the talents of second-year wide receiver Elijah Moore.

Moore has been slowly transitioning into a new role over the past few weeks since requesting a trade. The Jets are moving him into the slot after playing him on the outside throughout his entire NFL career. As we have previously broken down, this is a wise move by the Jets.

However, the role change is yet to produce any tangible results. Moore did not touch the football in either of his first two games as a slot receiver. He saw just one target across the two games.

Will No. 8 continue to be nothing more than a mere decoy? Or will the Jets rediscover the Elijah Moore that showcased star-caliber potential over the final six games of his rookie season?

We break down the ideal plan for Moore on the latest episode of the Cool Your Jets podcast. This is just one of many topics discussed on the episode as we recap the first half of the season and look ahead to the future. Additionally, we discuss how the Jets will replace Sheldon Rankins, how they will manage the offensive line when Max Mitchell and George Fant return, and much more.

Next Article: Grading every Zach Wilson throw vs. Denver Broncos 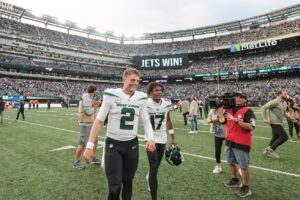 What’s at Stake for the New York Jets in the Second Half of the 2022 Season?