The New York Jets are slight road favorites over the Seattle Seahawks. Even after losing their last four games and five of the last six, the Jets are still in contention for the playoffs. If the Jets can take care of business and get some help, they could see themselves back in the playoff picture on Sunday night.

The Seahawks have been struggling just as much as the Jets. After starting the season 6-3, Seattle has lost three games in a row and five of their last six. Geno Smith has cooled off since starting the season hot as he has turned the ball over often in recent weeks.

With Mike White returning as starting quarterback, the Jets are a better team than last week. White gives the team the best chance to win out of their three quarterbacks. Their offense is much more explosive with White under center as he has moved the ball well in his limited amount of game action.

The Jets and Seahawks need a win in the worst way to keep their seasons alive. It should make for an exciting game between two hungry teams.

I anticipate this game staying under the total. The Jets have stayed under for most of the season, including eight of the last 10 games. Their defense has been strong all year and I think they match up well with Seattle.

The Jets’ defense is giving up the third-fewest yards per game in the NFL only behind the Philadelphia Eagles and San Francisco 49ers. New York’s defense ranks fifth in passing yards per game and fourth in points per game allowed.

When Seattle was having success at the beginning of the season, they were throwing the ball well. Their offense ranks 11th in passing yards per game but I think the Jets will be able to slow them down. With the Jets’ pass rush, they have been able to create pressure all season and make it hard on opposing quarterbacks.

As the Jets continue to struggle to finish drives with touchdowns, I expect this game to stay under the total and be a low-scoring game.

Brandin Echols (quad) and Jeff Smith (knee) have not practiced all week and are out. Vinny Curry (elbow) and Nate Herbig (ankle) were added to the injury report on Friday and are questionable. Lamarcus Joyner (hip) was a full participant on Friday but is questionable for Sunday.

Next Article: Which NY Jets blockers allow the most run-stuffs? 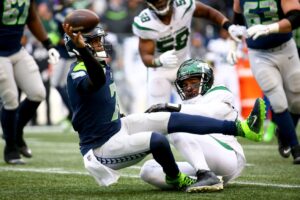 What’s Going on with Bryce Huff?

What’s Going on with Bryce Huff? 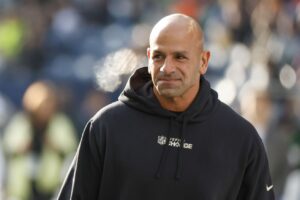 The Saleh Conundrum: What to Do With the New York Jets Head Coach?