The Jets are in Foxborough this weekend for their second game of the season against the rival New England Patriots. Today’s podcast is a preview of the game.

After a successful first half of the season, the Jets are in great shape coming off their bye. With a win on Sunday, they will be in first place in football’s toughest division. It would have been difficult to fathom this at the start of the season. However, the Jets could conceivably be in last place in the East if they lose this game. There is plenty at stake.

Much of the game could come down to the quarterbacks. Both Zach Wilson and Mac Jones were 2021 first round picks. In the first meeting between the teams, Jones’ big mistake was wiped out by a penalty. Wilson’s mistakes were not. Avoiding the big mistake could be decisive in this one.

Thanks for listening and watching. 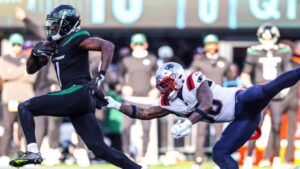