The Jets elevated two players from the practice squad, Conor McDermott and Tanzel Smart, meaning the Jets will have 55 players on the active roster.

As a result, they will need to name seven players Sunday as inactive against the Patriots. Here’s our guess at which seven they will be.

Two are easy to figure out because they’ve already been ruled out. Those are wide receiver Corey Davis and defensive tackle Sheldon Rankins. Tight end Kenny Yeboah will likely be a third as he was listed as doubtful on Friday, so Jeremy Ruckert will be the third tight end this week.

As far as the other four are concerned, QB Joe Flacco is likely to be inactive again. Mike White has been running as QB2 for a few weeks now and the Jets always make the third quarterback inactive. Cornerback Bryce Hall has been inactive every week since Week 2 and there’s no reason to believe that will change now.

Running back Zonovan Knight has been inactive for the past two weeks since getting the call up to the active roster, as the Jets have been running with Michael Carter, James Robinson and Ty Johnson as the top three. And Tony Adams has been inactive four of the past five weeks, as Will Parks and Ashtyn Davis also provide special teams value.

So the seven projection inactives in quick list form: 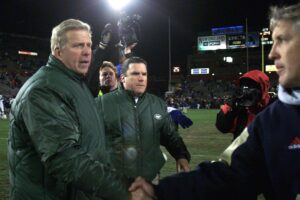