The Kansas City Chiefs’ juggernaut offense takes on a Chargers’ team that struggles to score tonight on Sunday Night Football.

The 5-4 Los Angeles Chargers come into this game losers of two of their last three games. With star wide receivers Mike Williams and Keenan Allen hobbled by injuries, the Chargers usual high octane offense has been grounded of late. The Chargers haven’t scored more than 23 points in a game since week 5 of this season. It’s tough to win football games that way. Keenan Allen looks like he will be returning to action this week, so that may give the Chargers’ anemic offense a much needed boost. They’ll need it against the high powered passing game of the Kansas City Chiefs.

The Kansas City Chiefs come into this game winners of five of their last six games. The Chiefs’ offense is a juggernaut. They lead the NFL in passing yards, passing touchdowns, and points scored. The Chiefs have scored less than 20 points just once all season. Against a Chargers team that struggles to score, the dominant Chiefs’ offense gives them an overwhelming advantage in this game.

The Chiefs have won three of the last five meetings between these two teams. I think that’ll be four out of six after tonight. I have submitted my pick for this game and all this week’s games using the widget from our partners at Tallysight. You can follow all my picks throughout the season, as I prove for another season how I’m not made to be a gambler. 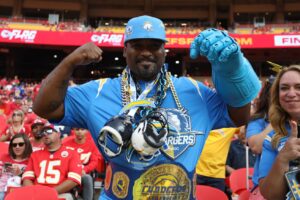