Joe Douglas should not compound his mistakes

Once an NFL team’s season is over, the day of reckoning soon arrives.

Although official player transactions do not occur until after the Super Bowl, the decisions regarding many of them likely occur beforehand.

The Jets and general manager Joe Douglas have many hard evaluations to make, particularly regarding the salary cap. As of the last day of the 2022 season, the Jets have approximately $15 million in cap space for 2023, including the presumed cap increase. With all the needs on the roster, they will need to clear significantly more space to make their roster playoff-ready next season.

There are some players who can be released with minimal cap ramifications (Corey Davis, Carl Lawson). However, besides the roster holes those cuts would create, they are also not enough to make the Jets cap solvent prior to free agency and the draft.

To maximize the team’s talent in 2023 while minimizing its cap drain, Douglas will need to clear some contracts that contain not-insignificant dead cap hits. He did an excellent job doing that with the mess left for him by Mike Maccagnan, but his own track record as a general manager is spotty. To fulfill what will most likely be a playoff mandate next season, Douglas will need to be as ruthless with his own signees and draft picks as he was with his predecessor’s.

At the intersection of behavioral, economic, and logical reasoning are a bunch of fallacies of thought and discourse that are common pitfalls for humans. One of those fallacies is called the sunk cost fallacy. According to Investopedia, “Sunk costs are those which have already been incurred and which are unrecoverable. The sunk cost fallacy is a psychological barrier that ties people to unsuccessful endeavors simply because they’ve committed resources to it.”

The Decision Lab adds, “The sunk cost fallacy occurs because we are not purely rational decision-makers and are often influenced by our emotions. When we have previously invested in a choice, we are likely to feel guilty or regretful if we do not follow through on that decision.”

Examples of the sunk cost fallacy include refusing to sell a stock that has lost money and is clearly on a long-term downturn, continuing to read a boring book or watch a subpar movie, enrolling in a gym and keeping the membership despite never using it, delaying a breakup in a relationship that is going nowhere, continuing a research project that is draining budget and not yielding results, and so many more.

One of the classic examples of the sunk cost fallacy arises in sports. When franchises have invested heavy resources in a player, they usually hold on to the player no matter how poorly he is performing. The money is unrecoverable, but the emotional aversion to loss causes the executive to compound his sunk cost by continuing to eat up his resources (e.g., salary cap dollars, a roster spot, playing time, etc.) on that player.

In recent weeks, the sunk cost fallacy seems to have pervaded Jets Nation. It is critical for the Jets organization to avoid that trap.

The Jets invested heavily in Zach Wilson, picking him at No. 2 overall with the accompanying four-year fully guaranteed contract structure. After two historically bad seasons at quarterback, Wilson’s viability as an NFL backup is in question, forget about his ability to become a franchise QB.

Robert Saleh continues to pay lip service to the idea that the Jets are intent on keeping Wilson around and developing him. In many ways, that would be the classic sunk cost fallacy: thinking that they invested too many resources into him to just give up despite evidence that this might be the best move. Additionally, it does appear that there may be some fear that if Wilson goes elsewhere and excels, it will reflect poorly on the Jets’ organization. That is another loss aversion fallacy: preferring to possibly lose everything so that others should not potentially gain.

If the Jets do, indeed, give up on Wilson, the most viable option would be to trade him after June 1. The cost would be significant, but the gain would be an addition by subtraction: the loss of the Wilson distraction, the ability to move in a different direction, and fewer resources devoted to a quarterback development project that has rarely if ever been successful in the past (at least with a QB who played this poorly previously).

The Jets would obviously hope to recoup at least some value for Wilson. The precedent is there in Douglas’s trade of Sam Darnold for a net return of second and fourth-round picks. There is always the possibility that some arrogant NFL coach would think they can fix Wilson and offer something more than a mid-to-late-round pick for him. However, the likelihood is that the return for Wilson would be paltry compared to the Jets’ losses.

In this case, there is a reason to keep Wilson around simply because you lose even more cap space by letting him go. However, trading him after June 1 if there is even a reasonably willing partner minimizes the new costs while maximizing the ability to recoup some of the sunk costs.

This is not a financial sunk cost argument, although, obviously, whatever is left on Mike LaFleur‘s contract would still be owed to him were he to be fired. The real fallacy here is that developing a system takes some time and continuity, and firing LaFleur would force the Jets’ offense to start over again.

However, considering that the Jets will certainly bring in a new quarterback and as many as four new offensive linemen in 2023, there is less of an argument for the system. If anything, it is a system that has not worked, and that is the sunk cost. Rather than retaining LaFleur and just canning OL coach John Benton and QB coach Rob Calabrese, it makes sense to just completely overturn the sunk cost and go in a different direction offensively.

This is particularly true when considering that the Jets’ only productivity in the run game seemed to come on pitches, traps, and other power/gap runs. The outside zone and split zone run games were awful, and C.J. Uzomah was a big reason for that. Since Uzomah will still be on the team next season due to the structure of his contract (as he was not so bad that it makes sense to lose money in cutting him), the Jets would do well to go in a direction that emphasizes the strengths of their roster rather than trying to fit a square peg into a round hole.

Furthermore, it is interesting to note that Kyle Shanahan, from whom LaFleur learned his offensive scheme, has shifted away from the outside zone scheme and toward a power game. Whether that was a personnel or ideological decision (or both) can be explored further, but the fact remains that the very man who taught LaFleur has shifted away from a strategy to which LaFleur sticks stubbornly despite a lack of success.

The day after the end of the regular season is usually the Black Monday of the NFL when coaches get fired. Following the Jets’ six-game losing streak to end the regular season, it would be wise of them to start fresh with their offensive philosophy. The jobs of both Joe Douglas and Robert Saleh may just be tied to that recognition. 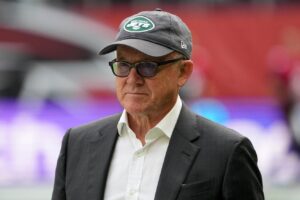 The Right Way, the Wrong Way, and the Woody Johnson Way

Woody Johnson says there is no playoff mandate, but says team is ready to make a run

The Right Way, the Wrong Way, and the Woody Johnson Way

Woody Johnson says there is no playoff mandate, but says team is ready to make a run