The Jets’ best chance of taking the lead in the fourth quarter of Sunday’s loss to the Vikings ended on a frustrating goal line sequence. The decisive play was an incompletion intended for Braxton Berrios on fourth and goal from the one yard yard.

You can see what the Jets were trying to accomplish on the play, and it was almost successful.

It begins with Mike White signaling Berrios into motion from the right side of the formation to the left side.

This motion is likely going to leave Berrios with a favorable matchup. There is only one cornerback to the left side of the field, and he is aligned across from Corey Davis. Berrios is likely to get matched up against either safety Harrison Smith or linebacker Jordan Hicks who will need to bump over so Minnesota won’t be at a numbers disadvantage.

Now one thing to note is that Davis’ original route is run to the flat. The defender on him is playing with inside leverage so Davis would have a clear path for getting open. It would be an easy pass.

If White had recognized this, he might not have brought Berrios in motion because the defender on Davis will bump over with the rest of the defense to account for Berrios and end up with outside leverage on Davis, taking that route away.

Here is the signal for everybody to move over because Berrios is motioning to the left of the formation.

You can see his alignment change after the motion alters the defense. He’s in much better position to take away a quickly outside breaking route by Davis.

The Jets are still in good position since they will have wide receiver (Berrios) against either linebacker or safety, a clear edge for the offense.

To make life even easier, Tyler Conklin’s job is to create a rub as he goes out on his route.

Conklin frankly could have done a better job, but there is enough for Berrios to get separation breaking inside against the linebacker.

Berrios is breaking inside with a mismatched defender trailing him.

White puts his pass just a little behind Berrios, and the slot receiver cannot hold on.

On a play like this I think some blame has to go to White for less than perfect placement, and some has to go to Berrios for not hauling in a pass that was still catchable if not perfect.

This is the type of play that shows the complexity of the NFL. If White throws the ball a bit better, or Berrios holds onto the catch, we probably have a week of talking about how the Jets schemed the perfect mismatch for a key moment of the game. Instead Mike LaFleur is getting roasted for red zone play calling.

Now I do think there are some criticisms that are valid about this call. Coordinators get blamed when execution fails, but there are some aspects of this play that make you wonder whether it actually maximized the Jets’ chances of success.

So there’s blame to go around. The Jets were this close to victory and praise.

Never let it be said life is easy in the NFL. 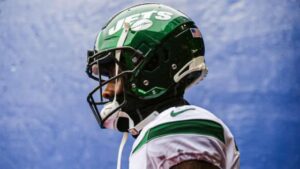 Recapping Jets loss to the Bills

Recapping Jets loss to the Bills