The defense for the New York Jets did all they could to win the game against the New England Patriots, while the offense did all they could to give the game away. And as we’ll see with some of the grades from Pro Football Focus, the numbers speak for themselves. Only one offensive player scored above a 70 and it was a player making his first start of the season.

And yes, spoiler alert, before we even get there, the bottom of the list on offense is exactly who you think it is. Let’s dive into some of the numbers.

McGovern was the best run-blocker (68.3) among the linemen and also scored a respectable 71.0 in pass-blocking.

Moore started seeing more of an opportunity Sunday and even had two catches as the Jets try to get him more involved in the offense.

Conklin was among the best pass-blockers Sunday (70.5) and was the best run-blocker (75.5)

You can all pick your jaws up off the floor. It’s shocking (not really) that Zach Wilson graded the worst and it wasn’t even close. His passing-game grade? 28.7. Some may think even that’s too high. Don’t think much more needs to be said.

The Jets had quite a time trying to run the football and PFF points to Ogbuehi and Tomlinson as two reasons why. Ogbuehi scored a 37.6 run-blocking grade and Tomlinson was at 45.5. On the flip side, they scored 65.5 and 76.5, respectively, in pass-blocking.

At this point, it shouldn’t be a surprise seeing Quinnen Williams at the top. He’s the heart and soul of this defense and now has a career-high eight sacks this season and there are still seven games left to play. A double-digit sack season is very much in the cards for Williams.

Michael Carter II has quietly become one of the better nickel corners in the NFL this season. He also showcased strong run-defense skills Sunday, leading the defense with a 90.5 grade in that category, higher than the 88.7 of C.J. Mosley and the 86.1 of Quinnen Williams.

By the way, Bryce Huff, with three pressures and a sack in just 13 snaps, was sixth at 73.8 overall.

Harris only played five snaps in place of Quincy Williams, so take his grade with a grain of salt. Still, PFF was none too thrilled with his cameo appearance, giving him grades of 22.6 in tackling and 29.0 in coverage.

In his first start this season, Tanzel Smart played 18 snaps and scored a 67.4 grade. Sauce Gardner had a 66.7 grade, allowing just two catches for 19 yards and a 63.5 passer rating.

Who will start at qb? Viewers join the show

Who will start at qb? Viewers join the show 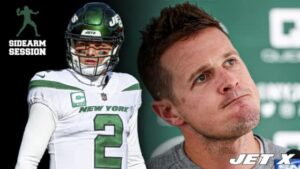